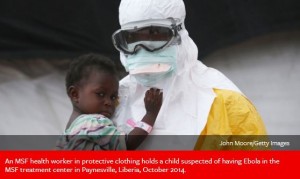 Ebola first appeared in 1976 in simultaneous outbreaks in Nzara, Sudan, and in Yambuku, DRC

The latter was in a village situated near the Ebola River, from which the disease takes its name

The case-fatality rate varies from 25 to 90 percent, depending on the strain

If contracted, Ebola is one of the world’s most deadly diseases. It is a highly infectious virus that can kill up to 90 percent of the people who catch it, causing terror among infected communities.

Doctors Without Borders/Médecins Sans Frontières (MSF) has treated hundreds of people with the disease and helped to contain numerous life-threatening epidemics.
Join the #kareemsalmanfoundation in fighting the Ebola Virus